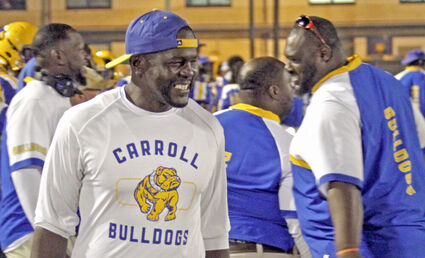 Questions continue to arise over an incident that happened at a high school football game between Carroll High School and Franklin Parish on Thursday, October 10, 2022. Initial reports from the Franklin Parish Sheriff's Department say that several Carroll coaches were escorted out of the stadium press box for allegedly using profanity in the presence of others in the press box. Some accounts say that Sheriff Kevin Cobbs went to the press box to escort one of the Carroll coaches back to what was assumed to be the Carroll sidelines when an incident happened that allegedly caused Franklin fans to get involved. It is unclear what exactly happened, only that "contact" was made with the sheriff, and as the two were walking away, Franklin fans chimed in.

Was the Carroll coach threatened with bodily harm by some Franklin fans? What caused Carroll coaches to leave their side of the field to go to where their fellow coaches were being surrounded by fans who should not have become involved, especially since the coaches were in the sheriff's company? As of press time, neither the sheriff's office nor Monroe School Superintendent Brent Vidrine has given any comments to clarify exactly what happened. Vidrine only said that the Louisiana High School Athletic Association had been contacted, and more information on what may be done is expected. Other sources at the game shared the situation could have been handled calmly but took on ugly undertones because of the alleged conduct of the sheriff. Sources allege that the sheriff went to remove several Carroll coaches from the press box, and they left the press box as ordered, but according to people very close to where the sheriff and the coaches were, the situation quickly changed. They were coming down the bleachers on the Franklin side and were met by a hostile crowd, many said because of the way Carroll was dominating the game. Carroll High School was leading 20-3 in the fourth quarter. According to sources, the sheriff himself allegedly verbally berated the Carroll coaches, yelling at them while escorting them through the fans. Some have said that even though the coaches were complying with the sheriff, he "violated" their space instead of keeping a reasonable distance between them. No one had been arrested for harassing the coaches whom the sheriff was paid to protect, but the coaches continued to try to navigate the crowd as best they could while they were passing through hostile territory. Sources say in just seconds, the sheriff got into a physical altercation with one coach, where they went to the ground. That's when some fans allegedly became involved leading to others becoming involved, as a melee ensued. Sources say that Carroll's coaches on their sideline saw what appeared to be a scene involving one of their own, and they began walking across the field to try to mitigate the situation. The Carroll coaches were surrounded with the sheriff right in the middle of things, sources who witnessed the chaos shared. None of the Carroll players got involved, which showed great restraint on their part and good discipline from their coaches. Finally, when things were back under control, the game resumed. Carroll won the game by a score of 29-8 and are undefeated so far this season. Video on Facebook from the game after its aftermath showed some disturbing scenes that would make Black people believe that we were back in the 1960s. After the game ended, there was no end-of-game handshaking ritual, even though none of the players on either team were involved in the altercation between the sheriff, Carroll coaches, and some Franklin fans. That, perhaps, was a sign of bad blood that won't easily be forgotten. Carroll personnel and school supporters saw how things changed as they prepared to leave. The players allegedly weren't allowed to go back to their locker room. The buses were quickly moved into position for them to leave. Some Carroll supporters became worried when a "wall of officers" led by the sheriff came into the vicinity of Carroll's side of the field and took on a posture (seen on video posted on Facebook) as if they "were daring" them to say or do anything. There were allegedly officers from Monroe who traveled with the team, but they appeared to keep a low profile. According to the video, those Franklin officers kept their eyes trained on Carroll's fans, not moving, staring as if they were, as one witness said, "waiting for an opportunity that never came." They finally were able to leave, but many will remember that night for the rest of their lives. Arrests by the sheriff have been threatened as the school superintendents of both systems discuss the matter further. The focus will most certainly be on Monroe City Schools Superintendent Brent Vidrine and how he navigates what happened when his coaches were complying with orders to leave the press box. The only thing that kept it from getting worse was the character shown by Carroll fans and, most of all, the students. Looking at videos, they were very mature in the face of adversity. Something that sources said that some Franklin fans didn't show. Nor those in law enforcement.