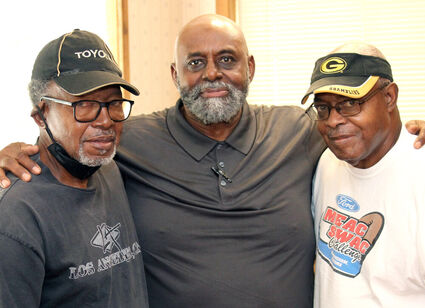 Jonathan Williams, Grambling 2022 Legend Andrew Jackson and Wilbert Williams were at the Bryant's Addition Reunion in Monroe LA on July 7, 2022.

Grambling Legends Sports Organization hosted the 14th Hall of Fame Induction Ceremony Saturday, July 9, 2022 at the Hobdy Assembly Center on the campus of Grambling State University. One of this year's Grambling Legends Sports Hall of Fame 2022 Inductees was Andrew Jackson, a former footballer for the Tigers. Andrew Jackson was born and raised locally and attended Richwood High School in Richwood, LA. At Richwood, he was coached and mentored by former GSU greats Mackie Freeze, Eugene Hughes, and Joe Dixon. While at Richwood, he had the honor of playing with other Grambling greats, including...