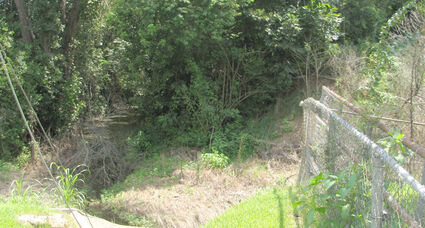 District 3 Erosion- On White and Barlow Streets in the Booker T. Community, residents are losing land due to erosion over the years caused by ditch which has turned to a canal

Residents of District 3 in the South College area extending past the railroad tracks on White Street said that Monroe City officials are not doing enough to meet their concerns in their neighborhood. The Monroe Dispatch has published a series of articles highlighting issues of concern made by residents who have said things have gone on for too long. The biggest problem some homeowners face is property erosion in the vicinity of a large ditch that could be called a canal. An area of the ditch that connects to White and Barlow Streets is of particular concern, as the Monroe Dispatch observed several homeowners' yards that have eroded away. Residents shared that they have repeatedly contacted city administrations, including Monroe mayor Friday Ellis, to no avail. The airport is not far away from where the erosion is occurring. Still, residents have said that city officials told them they are aware of infrastructure needs, but airport projects are a higher priority. Even at a town hall meeting hosted not long ago by District 3 Councilwoman Juanita Woods, residents were told that they would have to wait. The erosion of residents' yards has led to problems with wildlife like snakes that appear in their yards. Some are fearful of going outside at night because they are afraid of being attacked. Alligators have also been sighted because of the water in the ditch. Overgrown lots behind the Walmart on Desiard Street were cut a short time ago, but since then, the grass has grown back to where it was. It is still an eyesore at the railroad tracks on White St., as the grass is high. With the tall grass and rain, mosquitoes are becoming a bigger problem for many residents in the South College area. Residents are angry because they feel that city and parish leaders have abandoned them, as it seems no one wants to address the issues or come up with solutions between the two governmental entities. It leaves them to wonder where is the cooperation from parish leaders that is always touted. The residents, after all, are taxpayers. One of the more pressing issues besides the erosion problem that residents say became worse after the 2016 flood is sewer and drainage issues. Many residents who live near S. College and Lionel Streets say that they have a severe problem with sewage coming through a city cover when it rains. The Monroe Dispatch visited the scene and saw where raw sewerage spilled out through exposed pipes. Residents said that several city officials from the Public Works department have only shown their faces as the problem still persists. Residents say that a sinkhole developed that they believe is connected to their sewerage issues when sidewalks were installed. It is a health hazard many believe that, if left unaddressed, can be extremely detrimental. Residents also feel that their councilwoman Juanita Woods is not getting enough help from her city council colleagues and Mayor Friday Ellis. They say that they are willing to take further steps over their concerns. They want to remind their elected officials that "with responsibility also comes accountability".