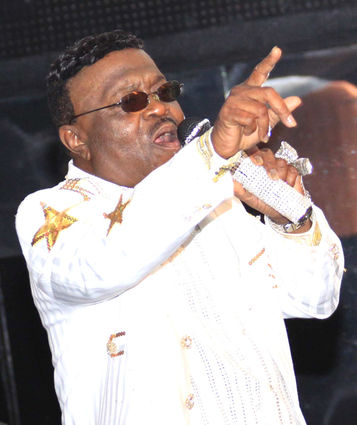 Robert "Sonny" Green was born in Monroe Louisiana in October 1941. At the age of eighteen the vocalist was hired by saxophonist Big Jay McNeely who had a 1959 hit single "There is Something on Your Mind" sung by Little Sonny Warner. As Warner's replacement Green was dubbed "Sonny" to make people think he was the original. Later, while on tour with Tyrone Davis, Green relocated to Texas, and then to Los Angeles. In the late 1960's and early 70's. This is Green's debut solo album produced, recorded, mixed and mastered by guitarist Kid Anderson at his Greaseland Studio. Green who has been called "the greatest R n' B talent you've never heard of" sings two songs from Bobby "Blue Bland. The robust Green opens with "1972's "I'm So Tired" with bassist Tarczy and drummer Smith dealing out some serious funk with a great horn arrangement and B-3 solo from Pugh. The second song, originally recorded by Bland, is 1964's "Blind Man", and Green delivers a dramatic performance. Green's beautiful vocal on Willie Nelson's "Are You Sure?" from 1965, features another great arrangement completed by a wee bit of tremolo from Andersen on guitar. Little Milton's 1970 hit "If Walls Could Talk" is another fabulous performance with a great horn arrangement. Green is perfection on Syl Johnson's 1973 Hi-Records "Back for A Taste of Your Love". Green also reprises his own single "If You Want Me to Keep Loving You". Two songs are from the pen of Rick Estrin. "I Beg Your Pardon" was first recorded in 1989 but Green wraps his voice around Estrin's lyrics like no other, while Pugh's organ sends shivers up your spine. The other Estrin composition is the spanking new "I Got There" written with Andersen. "Trouble" is a funky vocal duet with Green and Alabama Mike who co-wrote the song with Jojo Russo and Andersen. The hilarious "Cupid Must Be Stupid", co-written by saxophonist Hanck, Russo and Andersen; is another great vehicle for Green featuring the horns, a sax solo from Hanck, trumpet from Lewis, and Burns on piano. The closer is Ted Taylor's beautiful ballad "Be Ever Wonderful" from 1965, incredibly performed by Green as he stretches out for the high notes. Executive Producer Noel Hayes previously worked with Frank Bey. Now Hayes helps Green step out front on his first full-length recording. Green and Co. make magic. ~Richard Ludmerer