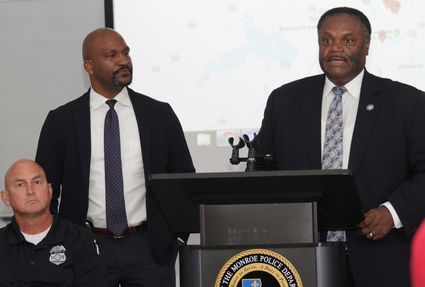 Monroe Mayor Jamie Mayo has taken a lot of heat over the last several years concerning the city’s rising crime rate. Information released from the city has shown an increase in crime, as one study depicted Monroe as the “most dangerous” city in the nation. Mayor Mayo and then MPD Chief Eugene Ellis vigorously contested those findings from the study and presented statistics that showed the study as being flawed. Nevertheless, the seed had already been planted, as the city would experience what many citizens saw as crime in the city being out of control. The mayor addressed the issue of crime by holding community meetings and even addressing the crime issues at various city council meetings when the issue would come up. Now the city has a new weapon that is being used to curb crime by taking guns out of the hands of those who are identified as potentially having guns through their characteristic behavior in the presence of police officers. Operation Ceasefire is a new program being initiated by Monroe Police. It is intended to take guns out of the hands of those before they can commit a crime. Interim Police Chief Reggie Brown, who is spearheading the crime initiative, said that the department wants to “address the cause”(guns)by effecting a cure(taking guns away)out of the hands of armed individuals who exhibit certain characteristics.

Operation Ceasefire is being used in other cities, but Monroe will implement other programs already in existence, with a heavy emphasis on youth crime. Since most violent crimes involves the use of guns, Ceasefire will work with other agencies to help identify whether one gun or several guns were used by either the same person or different individuals. That can greatly help law enforcement officers to apprehend persons, thereby taking another gun off the street. Ceasefire is about taking guns out of the streets, but there are other ways that it can be used, Brown said. The overall goal is to reduce crime in every capacity. Robbery and drug transactions are two areas where guns are used, but by taking guns away, which is the focus of the program, “a larger part of Monroe’s criminal element” will be addressed. Ceasefire had been in the planning stage for some time, but now that it has become a reality, the mayor along with the police department believes that Ceasefire will take a big bite out of crime.